Just a quick note. I just spent a few days looking at web calendars for a client. In particular, they wanted to show a 12 months view, rather than the more typical month at a time view. It’s in a java environment.

Stay away from jwebcalendar. Hasn’t been developed for a few years, and even though the feature set looks great and the screen shots look gorgeous, I wasn’t able able to get it to run (in tomcat 4 or tomcat 5). After putting in some log statements, and learning that you needed to specify the xsl and xml locations on the url line (like so: localhost:8080/jwebcalendar/calendar?LAYOUT=form.url&XSL=webcalendar.form.url.xsl&XSLbase=./data/webcalendar/xsl/&XML=webcalender.form.url.vm.xml&XMLbase=./data/webcalendar/xml/&XMLfilter=.xml&HTMLbase=&TITLE=PPres) I ended up seeing this error message:

Since I’d burned enough time, I didn’t follow the path any further. Major bummer, as it seemed like it would be a good fit.

After that, we looked at other calendar systems, and FlatCalendarXP seemed to fit the bill. It’s payware (for commercial software) but it has an elegant API and has worked well so far. Recommended.

About two years ago, I wrote about how to secure your wireless network by changing your router password, your SSID, and turning on WEP. Regarding WEP, I wrote:

This is a 128 bit encryption protocol. It’s not supposed to be very secure, but, as my friend said, it’s like locking your car–a thief can still get in, but it might make it hard enough to not be worth their while.

Now, some folks have created a flash movie showing just how easy it is to break WEP. Interesting to watch, and has a thumping soundtrack to boot.

Via Sex, Drugs, and Unix.

Any new technology needs to fit into existing societal infrastructures, whether it’s the printing press or the closed circuit TV system. Blogging is no different. I sometimes blog about what I get paid to work on, but always check with my employer first to make sure they’re comfortable with it. Since I’m a developer, it’s often general solutions to problems, and if need be, I omit any identifying information. Some folks take it farther..

Now, our good friends at the EFF have produced a legal guide for bloggers, which looks to be very useful, but is aimed only at those who live in the United States of America.

I get most of my website hits on two posts: Yahoo Mail Problems and Using JAAS for Authentication and Authorization. It’s common knowledge that if your business “does not rank in the top 20 spots on the major search engines, you might as well be in the millionth ranking spot”, but that’s apparently not strictly true for content. I looked at my webserver logs over a 42 hours stretch, when I got 125 hits from search engines, and looked at the start parameter, which generally indicates what page the results were on (0 is typically the first 10 results, 10 is the second 10, etc).

Here’s the graph of my results: 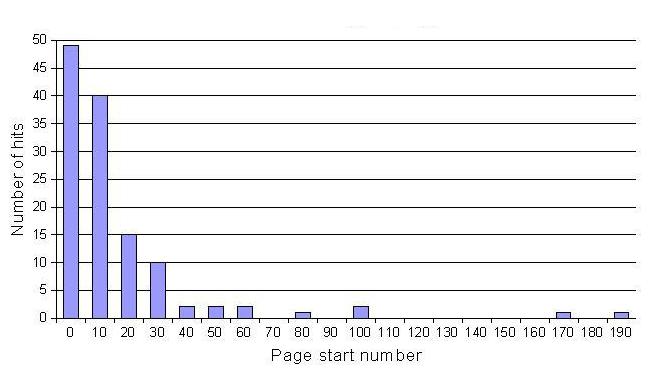 I have to admit I’m suprised by the number of hits beyond the first 20 results (columns 0 and 1)… 71.2% were from the first two pages, but that measn that 28.8% were from deeper in the search engine results. And someone went all the way to page 20–looking for a “servlet free mock exam” if you must know.

Interesting, for sure. Not that I’m claiming this is a long tail.

A town in Florida has started to allow folks to use their cellphone to pay for parking meters. Full story here.

I think it’s pretty cool and definitely is more efficient than coins–I don’t have to pay for a minute more of a meter than I need. I signed up and didn’t find the process too onerous, though it has some of the harsh, but standard, “we have an option on your first born child” clauses in the Terms and Conditions. Here are some of the choicer terms:

They can change fees anytime they want:

They can lock you out at any time:

…Mint reserves the right to: amend, suspend or discontinue any aspect of the Service at any time; impose limits on certain features and aspects of the Service; and restrict the Customer’s access to parts or all of the Service without notice.

They can verify your credit:

The Customer hereby authorizes Mint to make such credit, employment and investigative inquiries as deemed appropriate by Mint in connection with the use of the Services and the Credit Card Account.

There’s some ‘Fee Schedule’ referenced to determine how much you’ll pay for the service, but I couldn’t find that. I did find the list of supported parking lots, which hasn’t been updated to include Florida yet. They also have posted their privacy policy, which doesn’t appear too draconian, except for the ubiquitous “we can change this whenever we want, and you have to visit our website periodically to know” clause:

If Mint decides to change this Privacy Policy, changes will be posted on the Website, so that you will always be aware of what personal information is collected, how it is used, and under what circumstances it may be disclosed.

I do think it’s cool that North America is headed in this direction. (Japan has a wider variety of services payable via cell phone, see this flagrant marketing flash presentation for more.) Cell phones are an easy alternative to credit cards, which charger merchants a percentage of the cost as well as a fixed fee (though the card companies still get their pound of flesh from Mint, don’t you worry).

OK, here’s a grabbag of links and info regarding my talk last night (links and powerpoint available here). I was interested to know how many folks had actually worked on an internationalized application. (I18n is one of those APIs that you ignore until you need it, and then you absolutely have to have it.) Here are some rough numbers, based on a quick survey of hands. Out of a crowd of 25, about 5 people had used i18n. Of those, 3 had used it with web applications, and one with a J2SE application (I think the last person had used i18n with C). 3 of them had supported European languages and three had supported Asian languages.

I was emphasizing how important it was to pull out all the strings to be displayed to properties files, so they could be localized. A few folks in the audience mentioned that eclipse has support for this–out of the box for java classes, and with a plugin for jsps. (If you are reading this and know the name of the plugin, please comment; I did some googling and couldn’t find any jsp plugins that claimed an ‘Extract Strings’ capability.)

One person asked if we encountered issues with translating plurals, like house/houses. I hadn’t seen that problem with the application I worked upon, but was pretty sure that the java class libraries supported a solution. That solution is ChoiceFormat.

When I mentioned that we used Excel spreadsheets as our transfer format for slinging around translated strings, one of the other folks, who spent five years supporting a java application that was internationalized (he had some war stories), mentioned the XLIFF, an XML variant that is used in several translation editors. If you’re planning to do a lot of translation, you might want to take a look.

The talk after mine was an interesting discussion of SOA by Glen Coward. It was a rather discombobulating mix of an extremely high level look at the SOA landscape, complete with TLAs galore, and an extremely low level example of a rich client in Flex talking to two web services, one built with Axis on JBoss, and the other built with MS.NET deployed on Mono. The demo went poorly, as demos tend to do, but it was enough to whet my appetite to look a bit more closely at SOA.

In addition, as you’d expect from an employee of Novell, he was interested in delineating the differences between open source software and commercial software in a corporate environment, and where each made sense. His point was that in quickly changing areas, corporate software made sense, because of productivity gains that commercial IDE support makes available. In addition, deep integration (read, anything to do with backend legacy systems) is probably going to require commercial software. He didn’t specify why, but I’d guess that specialized backend integration is primarily going to continue to be commercial software for a number of reasons: it’s not sexy, it requires the backend system to test (not often available for the average hacker), and there are intellectual property issues. What Glen didn’t make explicit, but I will, is where that leaves open source–smack dab in the middle, gluing together all the applications. You know, like Apache and JBoss and Tomcat (among many others) already do.

As usual, I learned something at BJUG. And you can’t beat free pizza.

My i18n talk, that I gave tonight, is available on this page.

I just discovered wikibooks. They look pretty cool, will be interesting to see if they succeed like Wikipedia or fall by the wayside like many other wikis (Bruce Eckel has some comments on this phenomenon). Of particular interest to me is the J2ME wikibook.

I’m giving a talk tomorrow (Thursday) in Boulder at BJUG at 6:00. The topic will be “Internationalization and Localization in the Real World”:

This is not another rehash of the Internationalization Trail fromthe Java Tutorial website. Rather, Dan examines one website that is supporting a large number of locales in the real world and looks at how i18n and l10n were implemented in the real world. This includes the nuts and bolts of loading multi character data, framework tools that helped, how users were associated with locales, what parts of the i18n API were not used, and issues to be aware of.

Afterwards, there will be pizza and pop, then a talk about Services Oriented Architecture. Hope to see you there.

I remember writing a spidering program to verify url correctness, about six years ago. I used lwp and wrote threads and all kinds of good stuff. It marked me. Used to be, whenever I want to grab a chunk of html from a server, I scratch out a 30 line perl script. Now I have an alternative. wget (or should it be GNU wget?) is a fantastic way to spider sites. In fact, I just grabbed all the mp3s available here with this command:

The random wait is in there because I didn’t want to overwhelm their servers or get locked out due to repeated, obviously nonhuman resource requests. Pretty cool little tool that can do a lot, as you can see from the options list.